Does Binge Drinking Make You an Alcoholic?

Do you drink too much? Have you noticed that drinking alcohol alters your mood, changes the way you think, or makes other people uncomfortable around you? If so, it might be time to stop and take a look at what is happening. In this article we will help define binge drinking and alcoholism by discussing blood alcohol levels, frequency of drinking, signs of alcoholism and treatment options. 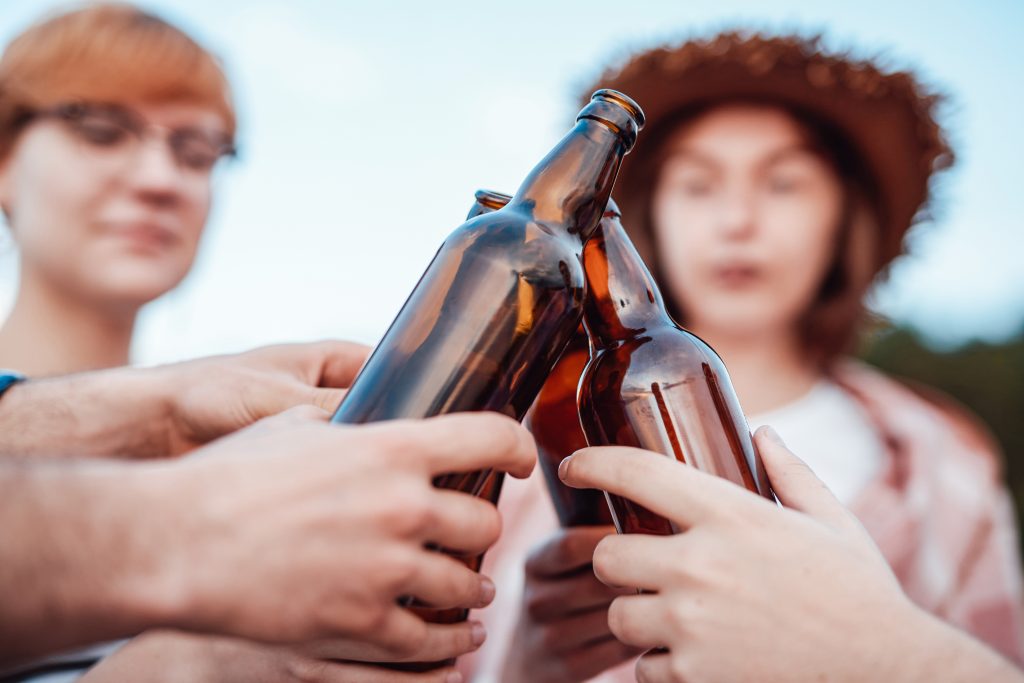 What is Binge Drinking?

Excessive alcohol consumption is responsible for an average of 88,000 deaths each year and cost the United States $223.5 billion in 2006. Half of these deaths and three-quarters of the economic costs are due to binge drinking (1).

Binge drinking is when someone drinks heavily in a short amount of time.

According to the World Health Organization, there are three levels of binge drinking that can be distinguished:

-A single occasion where a person consumes at least 60 grams (about two ounces) within about one hour;

-Two or more occasions per week with an average consumption of 50 grams or greater on each occasion and occurring over several hours; and

-Three or four occasions per month with an average consumption of at least 40 grams on each occasion.

Binge drinking is defined as a pattern of drinking that brings a person’s blood alcohol concentration (BAC) to 0.08 g/dl or above. This typically happens when men consume 5 or more drinks or women consume 4 or more drinks in about 2 hours.(2)

Blood Alcohol Level is most commonly understood as the level of alcohol in a persons blood but it can also be measured through a breathalyzer test.

What are the effects of an increased BAC?

Blood Alcohol Concentration (BAC) is measured by the amount of alcohol in a person’s blood.

- The higher your BAC, the more impaired you will be and the greater risk that may result from this impairment

- At about 0.07% to 0.09%, most people start feeling euphoria or relaxation as well as decreased inhibitions; however they may also feel nausea, vertigo, or thirst.

- At .15% (0.09g/dL), a person’s reaction times will be slowed, they may have impaired judgement and coordination, or experience slurred speech; at this point alcohol poisoning becomes more likely. (3) 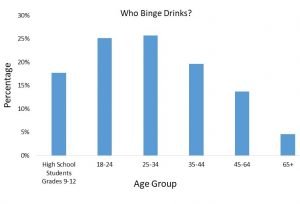 Binge drinking among individuals aged 18–34 years is common, but the majority of binge drinks are consumed by those aged 35 and older.

Of the 80% of individuals who binge drink, 4 in 5 are male. For females, binge drinking occurs only 31% of the time.

Binge drinking is more common among those with higher household incomes ($75,000 +) and educational levels. Lower-income people binge drink a greater number of times per year, but on average consume fewer drinks per binge episode.

Most people who are younger than age 21 and drink alcohol tend to binge drink, drinking large amounts of alcohol.

Does binge drinking make you an alcoholic?

It's important to know that people who are binge drinkers aren't necessarily afflicted with Alcohol Use Disorder (AUD), nor can all binge drinkers be considered alcoholics. However, there is strong data to show a correlation between binge drinking and the future development of AUD, especially in adolescence.

Frequent binge drinking between 18 and 25 years appears to be a risk factor for alcohol dependence in adulthood. (5)

Keep in mind, excessive drinking can still raise your risk for a whole host of other health issues.

How Does Binge Drinking effect your health

Binge drinking, or consuming alcohol in excess amounts at one time can lead to a host of health issues.

-Chronic binge drinkers are more likely than non bingers to experience mental health disorders such as depression and anxiety. Binge drinking has also been associated with the development of suicidal thoughts among young adults.

-Excessive drinking can lead to malnutrition in adults and children alike. Infants born to mothers who drink heavily during pregnancy have an increased risk of developing fetal alcohol spectrum disorder.

-Binge drinkers are more likely to be injured, and intoxicated individuals have a greater risk of being involved in car accidents.

What Causes someone to Binge Drink?

There are many reasons why someone might binge drink.

Specifically, research has indicated that binge drinking is associated with the cost and availability of alcohol , attitudes and control beliefs , social norms and pressure, social context and a ‘drinking culture’ and drinking habits and alcohol identity.(6)

The most common include boredom, social and peer pressures such as being at a party or out with friends, depression and anxiety, feeling stressed about work or school-related matters, to relax after an emotionally trying day.

Binge drinking can also be used as coping mechanism for traumatic events in one's life, like feeling rejected by peers or struggling with sexuality.

Consuming an excess of alcohol is always harmful to your health regardless if you binge drink only on weekends or a few times a week. While alcohol consumption is culturally acceptable - no amount of alcohol or binge drinking is good for your health.

Despite the risks, people can still take proactive steps to mitigate these dangers.

In order to maintain a lower blood alcohol level and avoid binge drinking, it's important to:

What can you do to stop binge drinking?

If you think that your alcohol use is problematic, the first step is to evaluate how much and how often you drink. You should also take note of what triggers a desire for alcohol consumption (people, events, time of day) as well as the consequences of your drinking.

If you find that alcohol consumption is causing problems in your life, then the next step would be to consult a medical professional about getting treatment for alcoholism or AUD.

Treatment options for Alcohol Use Disorder include: